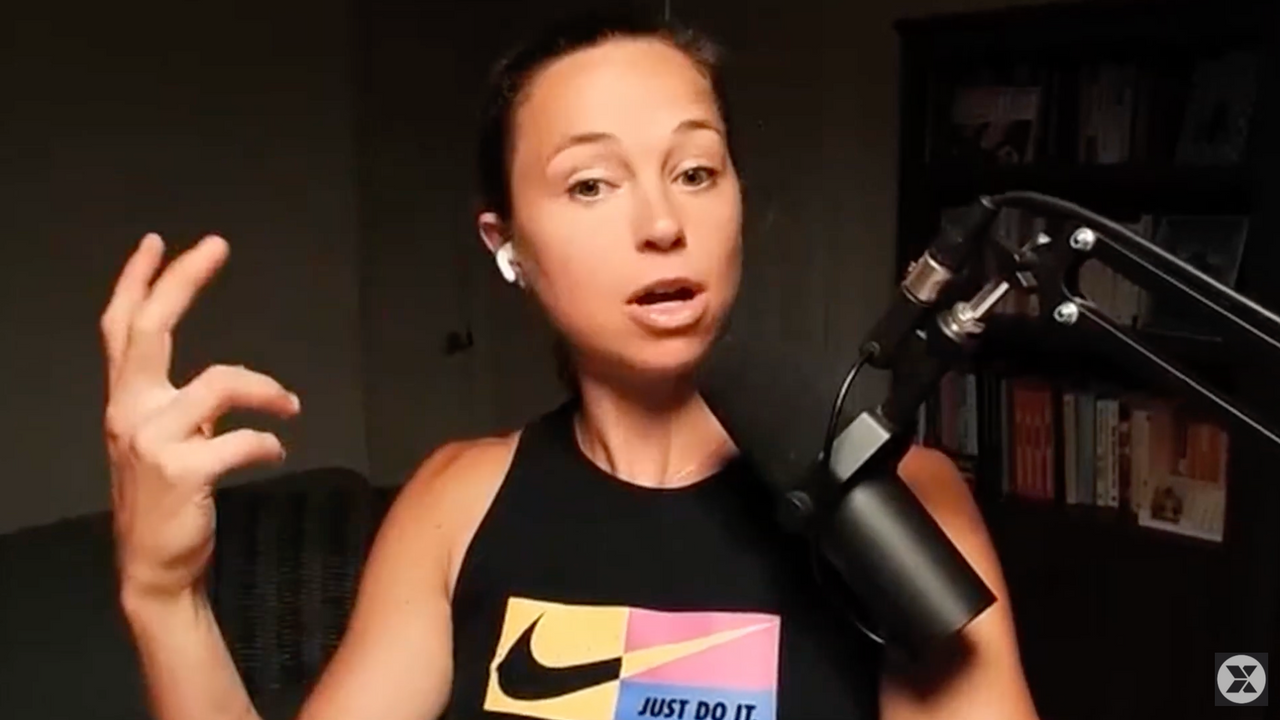 Okay, question, we got it. So hi. Hi, exclamation point. It says how I'm really looking forward to listening to this podcast, a few subjects that I would like to hear more on. And we can maybe talk about these in future episodes as well, because there's a few here and I didn't read this before we started recording. So sorry. But she said, obviously, you girls are too young for menopause. But it's tricky navigating the whole thing while trying to train and eat properly. Your body just has its mind of has a mind of its own. And it's hard when your heart when you hardly recognize yourself. She said, I tried keto and enjoyed it, but became a hyper responder and my physician freaked when she saw my ad to increase my carbs. And that's where it's a challenge, it's easier to have almost none than having 100 grams. It's like telling an alcoholic, you can have two beers a day with some emojis.

So she said, any tips or advice or anything like that to help with basically getting away from the all or nothing mindset? Well, one thing I'll say is that we do dive into this in the program, there is a nutrition manual that basically kind of lays out especially because she mentioned like, she's trying to balance it with training, and building muscle and changing your body composition, which you can still absolutely do at any age. Um, if anybody's listening, you can build muscle, change your body composition, lose body fat, at probably 95 years old, if you really wanted to. So that shouldn't be something that holds you back. But we talked about all this in the program. And we another thing is having structure and having a plan, that's something that I'm always going to be continuing to push with anybody that I work with, with anybody listening to this is that if you don't have a plan, if you don't have some type of structure and knowledge, like you talked about, it's going to be really hard to to get to where you want to go. Because, again, like you said, there is so much out there that there sometimes comes this paralysis analysis, right, you're hearing so many different things from so many from people on social media on different podcasts you're listening to. And it's hard to, you know, it's hard to know what to do.

That's one of the things that I you know, that I hear a lot is like, I everybody's saying these different things. I'm trying this one thing, and then I hear someone else say and so I switch up to that. And that is where we start to get into issues, because again, it's the analysis paralysis, it's also not being patient with what you implement, like if you implement that, you know, you say, Okay, I'm gonna bring my carbs up to maybe 150. And try that out, like total carbs, 150. Try that out for honestly, minimum, two to three weeks minimum, before you even make before you make any decisions. If you do this for three days, and you're like, oh, no, I feel like crap, or, you know, you, yeah, all this stuff, that's not enough time for your body to adjust for you to really see what's going on. Because, Hello, we're in real life, there's tons of other variables going on as well. That could be the things that are causing maybe that extra hunger, maybe you didn't, I don't know your kids up all night. And so you didn't sleep for two nights didn't have good sleep for two nights, or you're stressed at work. And now you're blaming it on the carbs for those three days that you try it like that is why we need to take the approach of okay, I need to implement this for a minimum of two weeks. And that's with anything, training, any type of nutrition change anything like that. I like bare minimum two weeks before you even make a decision on what you're going to do next, or how you're feeling about it or whatever, right. So that's something to think about.

That's something that we talk about in the program is and give you that is that structure that plan, how to come up with your own plan, how to be knowledgeable about that, how to set you know, your goals, whether it is for fat loss for body composition, or maintenance or to go into a building phase, like that's literally laid out for you. Like, these are the steps that you need to take in order to find your macros or, you know, find the eating style that's gonna work for you how many carbs, you should start with or potentially implement, depending on some different factors like we have that all laid out. So that's one thing. Another thing I would say is that focus on and we always say this, but focus on the whole food carbs, like whenever you're going to, I mean, I've been doing this for years working with clients for years, taking them away from strict keto, and bringing carbs back in, you know, the whole metabolic flexibility side of things.

But the two things that I will say is, Whole Foods is going to be your best friend when it comes to carbs. So focus on the fruits, the veggies, the the tubers, the starches, those types of things, right, if it had to face at some point, which is more protein stuff, or grew from the Earth at some point, you know, if you're training, think about implementing those carbs around your workout, that's going to be the best place to start because then you'll be able to, not from just a physiological standpoint, from a mental standpoint, too. It's a lot easier to be like, Okay, I'm going to, you know, eat this carb and then go train hard. So you have not just the energy coming in from those carbs.

To be able to put At towards your training, but we also know that your body's most insulin sensitive around your workout. So you're going to be putting those carbs to good use before and after in that recovery side of things. So that's where I would, that's where I always recommend starting, if you're like, nervous to implement carbs, start, you know, implementing around your workout, pre and or post and we talk all about nutrient timing and exactly what that means and what that looks like and even like so many different ideas in the main nutrient timing lesson in the mouth science program. So, a 20th plug for that on this episode.