Humans are NOT Machines: #4 Reason All Calories Are NOT Equal 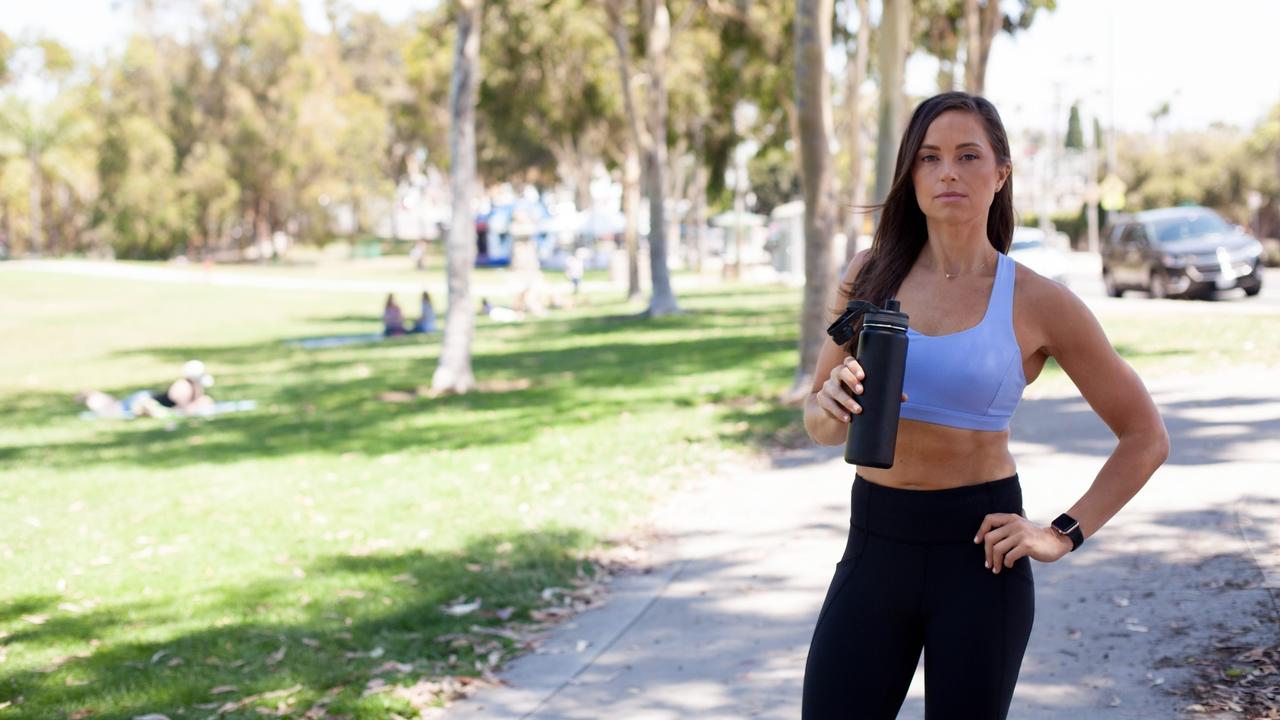 Contrary to popular belief, our bodies are not simple calorimeters.

As humans, we have hormones that influence all systems in the body and affect both how much food we eat and how much energy we burn on a daily basis.

Additionally, the macronutrient composition of the foods we eat can have vastly different effects on our hormones and thus impact both energy expenditure and the brain regions that control food intake.

One thing to note though is that hormones do not negate calorie balance, surplus, or a deficit...but they do help regulate them.

If your main goal is to lose body fat, please understand that it’s not exclusively calories or hormones -- it’s both!

To start, we have to understand what hormones actually are.

Put simply, hormones are chemical substances that act like messenger molecules in the body. After being made in one part of the body, they travel to other parts of the body where they help control how cells and organs do their work.

Before we jump into some of the different types of hormones that affect hunger and satiety, we have to first chat about the key player that’s responsible for actually regulating these hormones.

The body’s system for regulating food intake (and basically everything else) is coordinated by the hypothalamus. It’s located under the midline of the brain, behind the eyes.

There are different nerve cells within the hypothalamus that, when activated, either trigger hunger or inhibit it.

These nerve cells initiate and send hunger signals to other areas of the hypothalamus and the balance of the activity between these neurons determine whether you feel a conscious sensation of hunger or satiety. [*]

But what determines which neurons dominate at any given time?

Remember, hormones are messengers. They come from various tissues in your body and circulate in your blood.

These hormones send signals (or ‘messages’) to the neurons in your hypothalamus that regulate whether you feel hungry or feel satiated.

In order to understand how this whole system works, we need to be aware of the various hormones that control appetite.

The main hormones that regulate hunger and satiety are:

Leptin: Fullness/satiety hormone. Leptin is the most powerful appetite-suppressing hormone and is made in our adipose tissue (AKA fat cells). In general, the more fat cells we have, the more leptin the body produces. [*]

*There is a caveat with leptin though. People who are overweight or obese have high levels of leptin (this makes sense because the more fat cells you have, the more leptin you will have right?). According to the definition above, more leptin should equal more fullness and satiety.

Well, in this case, 1+1 does not equal 2. The issue is that in states of energy excess such as obesity and overfeeding, leptin levels do increase; BUT, leptin's effects in the brain are blunted due to something called leptin resistance.

Basically, the brain doesn't receive the signal it's supposed to get from leptin and therefore makes you 'think' you're starving and increases the signals to eat more and move less. [*] This has been shown to be one of the reasons why those who are overweight or obese struggle to diet and lose body fat. [*]

Insulin: Storage/fullness/satiety hormone. Insulin is produced in the pancreas and studies show that when insulin enters the brain, it inhibits hunger. Basically insulin tells the brain: “there is enough energy in the body, take a rest.” [*]

*As discussed in Reason #3 Why All Calories are NOT Equal, issues tend to arise when we continuously demand the pancreas to release insulin, it gets overworked, and insulin resistance ensues. Again, similar to leptin resistance discussed above, insulin resistance is a huge issue when it comes to trying to losing body fat.

Amylin: Fullness/satiety hormone. Amilyn is produced in the pancreas and plays a role in glycemic regulation by slowing gastric emptying (the time it takes food to empty your stomach) and promoting satiety. [*]

Incretins (GLP-1 & GIP): Fullness/satiety hormones. Incretin hormones are produced in the intestines in response to food intake. Incretins increase the feeling of fullness during and between meals by acting on the hypothalamus and by slowing the emptying of the stomach. [*][*][*]

Cholecystokinin (CCK): Fullness/satiety hormone. CCK is produced in the small intestine in response to food intake. When released, it activates the satiety centers of the hypothalamus in the brain and slows the emptying of the stomach, which may further increase the sensation of satiety due to the distension of the stomach. [*]

PYY (Peptide YY): Fullness/satiety hormone. PYY is secreted by the small intestine in response to food in the gut (after eating) and acts as an appetite suppressant. [*] 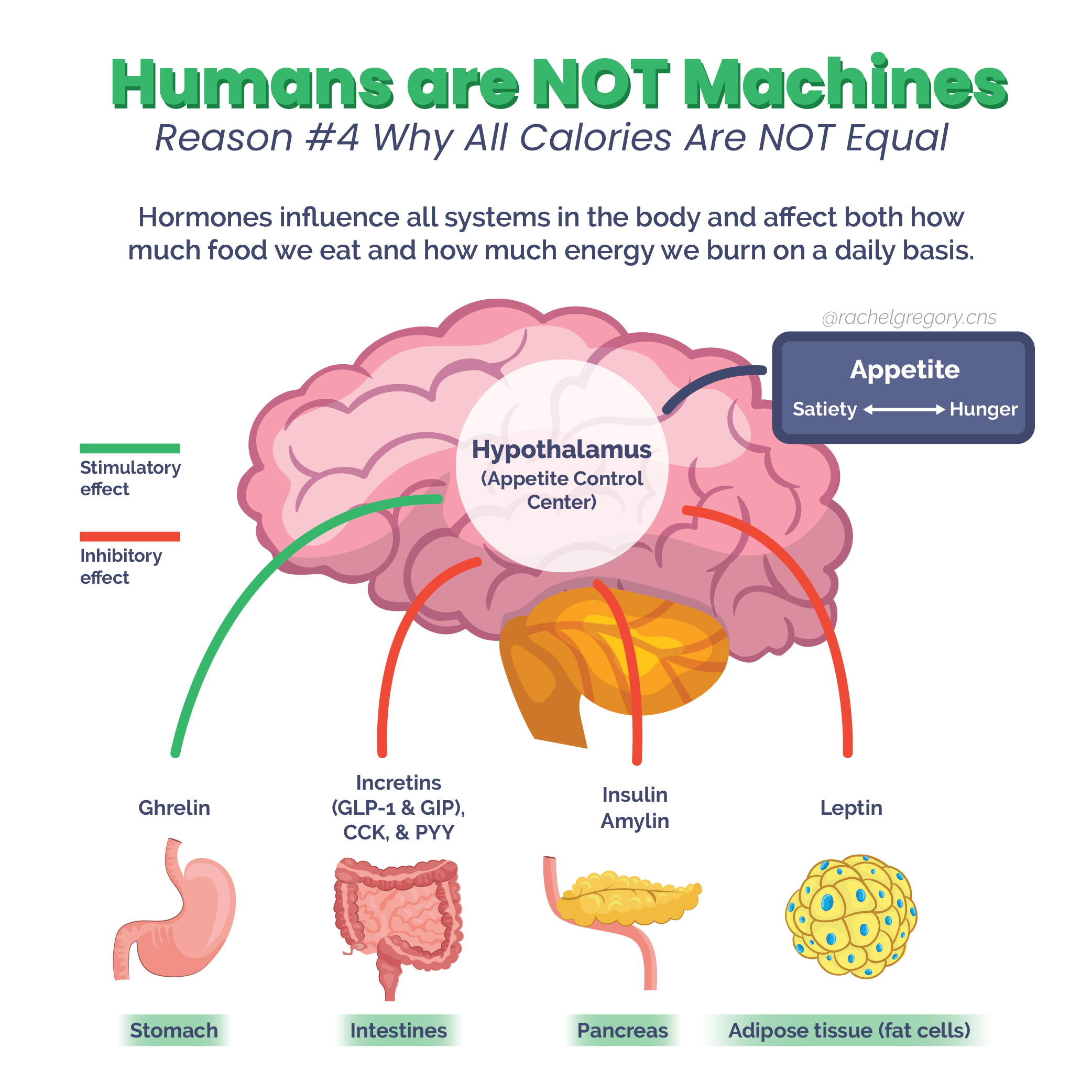 There are other hormones that play a role in hunger and satiety as well, but the ones listed above are the main players.

In addition, the hypothalamus receives signals from pleasure pathways that release dopamine, endocannabinoids, and serotonin, which also influence eating behavior.

As you can see, the signaling between your hormones and your hypothalamus is literally what drives you to either eat more, eat less, move more, or move less.

So now that we’re aware of the different hormones that regulate appetite and satiety, how do the different types of foods we eat affect these hormones?

As discussed in Reason #1 Why All Calories Are NOT Equal, studies show that protein is by far the most filling macronutrient.

Protein consumption can aid in keeping you full and satisfied for long periods of time with one of the main reasons being it helps reduce levels of the hunger hormone ghrelin and boost the satiety hormone peptide YY. [*][*][*]

I dive deeper into ALL the benefits of protein consumption in this post: Protein is QUEEN!

Traditionally, high-fat foods have been linked to overeating; however, this is usually due to the consumption of hyper-palatable high-fat foods (i.e., processed foods that contain a mix of fat, carbs, and salt like french fries or potato chips).[*][*]

In fact, studies have shown that dietary fat can suppress the release of ghrelin (the hunger hormone) and stimulate the secretion of many different satiety hormones including CCK, GIP, GLP-1, and PYY. [*][*]

Although there are varying results, the degree of saturation (or the number of chain lengths) within the fatty acid also appears to have an impact on the extent to which it regulates appetite. [*][*]

Further investigation is certainly needed to be able to provide definitive answers, but one thing is clear: dietary fat plays an important and beneficial role in hormonal regulation.

Your body needs fat to produce hormones, absorb vitamins and minerals, aid in proper brain function, and much more. To learn more about the benefits and different types of fats you should be consuming, check out this blog post: The Truth About Dietary Fat.

While carbs do also stimulate the release of satiety hormones, they seem to do so to a lesser degree than either protein or fat, especially in those who suffer from insulin resistance. [*] And if you remember from Reason #3 Why All Calories Are NOT Equal, we know that insulin resistance is on the rise in our modern society.

Not surprisingly, the effect carbs have on your appetite is also dependent on the type of carbs you’re eating. Of course, we’ve all heard the advice to avoid processed carbs when possible, but even that isn’t as simple as it sounds.

Take fructose and glucose, for example. Fructose is a sugar naturally found in fruits; however, the body appears to be far less equipped to process it than it is to process glucose. [*]

Not only is fructose only able to be metabolized in the liver (whereas glucose can be metabolized virtually everywhere else in the body), fructose has been shown to actually lead to higher levels of the hunger hormone ghrelin and produce even less satiety than glucose does. [*][*]

So does that mean fruit is bad? Not at all.

But even though fruits are natural and not highly-processed, a high-fruit diet may not be as “healthy” as it appears, especially when consumed in the absence of fat and protein. Avoid naked carbs and pair your fruits with a fat and/or protein source to prevent jumping on that blood sugar roller coaster that we discussed in Reason #3.

One thing that fruit does have going for it though, is its fiber content.

Fiber is something you’ve probably heard a lot about, and for good reason. Soluble fiber has been shown to reduce ghrelin release [*][*], as well as increase the release of CCK, GLP-1, and PYY. [*]

Another important characteristic of fiber that contributes to increased satiety is that it slows down the movement of food through the digestive tract. [*]

And if I haven’t confused you enough yet…

There is another caveat here when it comes to the effect that carbs have on leptin levels in those who are leaner and may not suffer from issues such as insulin or leptin resistance. [*][*]

I’m not going to dive into this subject in this post, but it is something we address in major detail (along with carb-cycling, optimizing hormones, and much more) in one-on-one coaching and the Keto For Women Program.

So as you’ve learned thus far, we can measure appetite objectively by looking at hormones and how different macronutrients affect these hormones.

However, it's important to note that satiety is a complex process influenced by a number of different factors. For example, the look, smell, texture, and taste of foods as well as the emotional response to certain foods play a large role in individual satiety.

But what if we could go deeper and actually alter the way certain hormones elicit effects within your body and also change your perception of how specific foods make you feel?

The Power of Metabolic Flexibility on Appetite Hormones

Switching from an everyday sugar-burner to a long-term fat-burner (AKA becoming more metabolically flexible) gives us access to alternative metabolic pathways, and with this shift comes a fundamental change in our hormones.

Experiencing nutritional ketosis and becoming fat adapted can lead to many hormonal changes that positively affect our ability to regulate hunger AND lose body fat. [*][*]

Additionally, appetite is usually naturally reduced and so are cravings for foods that typically lead to overeating, like sugar and carbs. [*][*]

I go into more detail on the benefits of keto for weight loss in this blog post: Keto For Weight Loss...The Truth Revealed. But here are some of the main implications for following a low-carb, keto lifestyle for overall hormonal balance. [*][*][*][*]

[Conclusion] So is a calorie really a calorie?

After reading this series -- 4 Reasons Why All Calories Are NOT Equal -- you should now understand that the human body is a highly complex biochemical system.

We have elaborate processes that regulate how calories are consumed, burned, used, and released as energy.

Different foods go through different biochemical pathways, and different macronutrients have a major effect on the hormones and brain centers that control when, what, and how much we eat.

So no, in the practical sense, NOT all calories are created equal!

Are calories the only thing that matter? Absolutely NOT!

I hope you enjoyed this series and if you know anyone who would benefit from this information, please make sure to share it with them! You can copy and send this link to share: https://www.metflexlife.com/blog?tag=blog